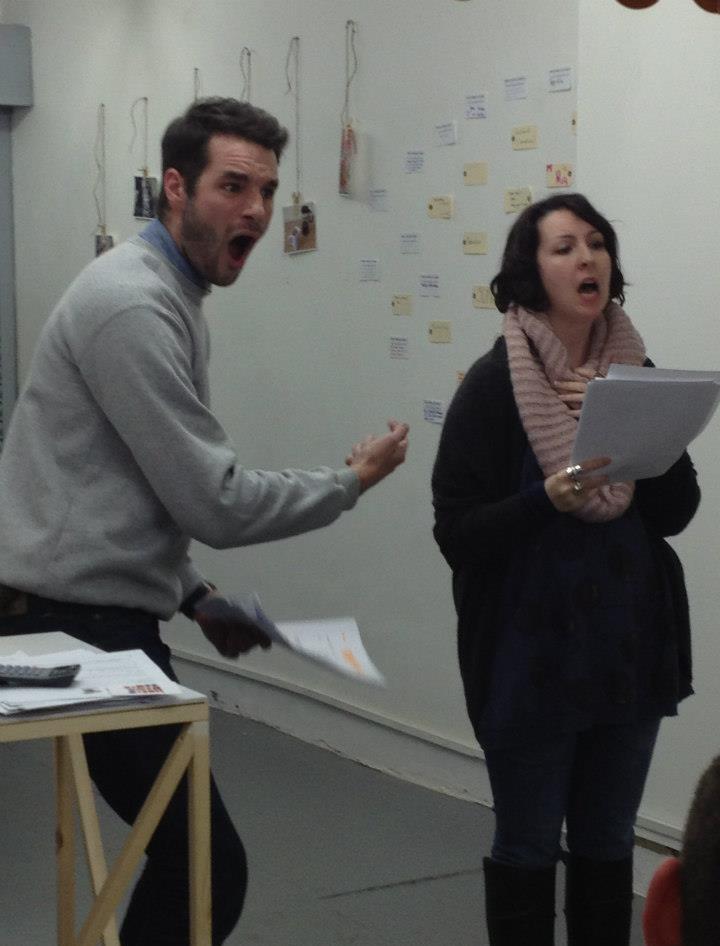 So WBN are doing another Cold Writing, how exciting! But, I hear you exclaim, where is the Live Blog? Because we love UNNECESSARY CAPITALISATION and riffs of toilet keys and what would Cold Writing be without those things? (Plays. It would be PLAYS.) But – I would hate to disappoint all one of you. So…HERE WE GO…

(As there’s no wifi in Jill where we’re doing this round of Cold Writing this isn’t quite a live-blog in the truest sense but – trust me – it was blogged as the day unfolded. The grammar alone can probably tell you that.)

10.17am: Our first actor arrives at Jill (Lucy who, fact fans, was in the first ever Cold Writing we did back in February 2010 in Brixton) and we have the first conversation of the day about the temperature of the shop.

10.25am: Our second actor, Sam, arrives. We have our second conversation of the day about the temperature of the shop. (See, we play at ‘Cold Writing’ being because the writers come in cold but, let us be honest, we only ever do it in places where the temperature is somewhere around freezing. One day I’d like us to do it on a beach in the Mediterranean.)

10.35am: SHOP TOUR. Which really means – come and see where the toilet that has the door that doesn’t close is.

10.40am: Charlie and I talk about seating. Which means that in five minutes we have covered the two topics that I have spent most of my time talking about as a person making theatre for non-traditional spaces. Basically any show boils down to: where people sit and what state the toilet is in. Should someone ever be foolish enough to ask me to dispense vague wisdom about theatre in shops my entire wisdom could be reduced to: FIND CHAIRS and CLEAN THE TOILET.

10.50am: Yep, still going. Though now we have a plan. We’re going to talk some more about chairs this afternoon.

10.56am: I take delivery of a projector that has nothing to do with Cold Writing. It’s big and I almost drop it, much to the person delivering its dismay.

11.10am: Charlie, Sam and Lucy retreat to Kente, the coffee shop across the road from us, to Drink Coffee and Read Scripts. Regardless of anything else which performance might bring to the high street my extensive research has shown that local coffee shops benefit from the caffeine addictions of those who make theatre.

11.15am: Our final actor, Stevie, arrives. I direct him to The Coffee.

11.16am – 1.10pm: Read-throughs take place. I can’t live blog this because I’m in Jill asking people to tell me things that make them happy. So you’ll just have to imagine this yourself

1.31pm: Rehearsals begin. “Caulifower Soup”by Kimberly Ashman is up first. It’s set in a soup kitchen if you were wondering.

1.34pm: We do absolutely not, totally not, almost set my coat on fire.

1.35pm: I exclaim RISK ASSESSMENT several times and then take a tranquilizer.

1.40pm: “Put. The. Ladel. Down.” This might be my new favourite exclamation of ‘breaking news’.

1.46pm: My shoes are coming under some scrutiny as part of the audience interaction.

1.50pm: Our “No Prop Rule” has resulted in a need for a ladel. Which would be a prop. I’m asked if we have spoons. I refrain from saying that this time last week I made Andy, our Joseph Mills, take a teabag out of a cup with a biro lid. We do have cups though…

2.00pm: First complete run-through. They make me laugh. I’m an easy target but we shall take this as a Good Thing.

2.10pm: More running through. We lose a table and gain some standing in the midst of the audience. Amongst the chairs.

2.20pm: The actors are split for Lucy and Stevie to rehearse Richard Walls’s “Window Dressing” and Sam to rehearse Ella Ashman’s “Waste”. First though Stevie and Charlie have to discuss what sort of “dead” they want Steve to be when he is the on “stage” non-speaking presence. Not dead-dead, if you’re wondering.

2.30pm: Monologue time. This one, as its title of “Window Dressing” might be a subtle hint towards, is set in a shop. This is handy.

2.34pm: My stapler gets a prominent place as a gift given to a King’s betrothed. Really.

2.40pm – 3.00pm: Rehearsing continues but my blogging doesn’t as I talk to people who have popped into the shop. What other theatre lets you watch rehearsals? (if that’s a question in a pub quiz, the answer is Shakespeare’s Globe, but we don’t make you take a 30 minute tour).

3.16pm: Sam has to leave through the shop door. This is clearly why Charlie wanted to keep the “tinckler” (this isn’t its proper name. I don’t know what its proper name is)

3.33pm: Stevie, as the non-speaking presence, gets cut. Such is an actors’ lot in life.

3.35pm: I play tealady. I don’t remove teabags with a biro lid because I do have a secret stash of spoons. Mwwwahhhh.

3.44pm: To be momentarily serious (it won’t last) one of the brilliant things about Cold Writing is the variety of responses the writers come up with. I’m someone who loves a bit of Structure (seriously, structure makes me happy) and, having had audience interaction and a monologue we’ve now got a duologue around a table. Stuff like this EXCITES me.

4.06pm: We realise there are two Sarahs mentioned in the play (well, a Sarah and a Sara but since we’re not spelling them out that’s probably academic) and decide to rename a character. Girls names are flung about until Charlie settles on Amy. I don’t say that I think this is because of Amy Pond (it is totally because of Amy Pond).

4.17pm: Big dramaturgical question about why one character says something to the other character (I can’t say what, it’s a spoiler). But it’s a biggie.

4.35pm: Time for our final play, Judy Upton’s “True Grit”. The desk that is normally mine in Jill becomes a prison cell. Standard.

4.40pm: In Structure Watch “True Grit” is the only play today which isn’t in real-time. Boom.

4.55pm: A brief – but significant – interlude about where the phrase “seat of your pants” comes from.

4.56pm: With some help from google I fill the gap in everyone’s knowledge.

4.59pm: This play makes me want to eat chocolate. I eat some of the mini eggs that are for the under fives Easter Bonnet making workshops.

5.10pm: Everyone is given a 20 minute break. Which means: COFFEE TIME.

5.16pm: Y’know what comes here? Another conversation about chairs.

6.10pm: RUN THROUGH FINISHES. For the first time ever Cold Writing has produced actually ten minute plays (I, as a writer with a tendency to over-run, can say that).

And, fittingly, this is where the live blog also finishes because I HAVE TO MOVE SOME CHAIRS.

(If you’re wondering where the serious reflection on Cold Writing is I’m leaving that to Charlie and Estelle. I promise they’ll use fewer capital letters)