Before writing this I checked my diary from last year, and was shocked to discover I had spent less than 48 hours in Exeter last year for Ignite 2013. The whole thing was such a whirlwind that I am delighted to say I will be around for the whole of this year’s festival! So, how to spend my time? Well, I currently have my eye on these:

At our beloved (get it?) Bike Shed Theatre, a piece of verbatim theatre about that most enduring  thing: Love. I missed this at Edinburgh last year and am delighted I can get to see it at Ignite. I remember reading about it and thinking this is exactly the sort of work I am interested in. Real people, real stories and LOVE. Looking forward to it.

Public Hanging in Dorset, during Ignite Festival? Don’t mind if I do. I loved The Ballad of Martha Brown from the talented (and very energetic) Angel Exit Theatre. This story has drama, intrigue, comedy, music and incredible physicality.

For my third pick I am intrigued by Theatre With Teeth’s Dirty Decadence. Having seen and loved Posh I am excited to see their take on the topic. I have to say I’m surprised this wasn’t one of Charlie’s picks as he set up the company back in 2007.

It has to be said here that I really wanted to pick Gloriator but the darstardly Mr. Andrew Kelly got there first.

Choosing three picks was tough, not least because there is an adaptation of Beowulf in the festival and there are very few times in life when I could legitimately roll out the fact that I have read Beowulf in its original Old English. Having held in any obnoxious showing off, however, my three picks are:

One of the most interesting blurbs in the festival: feminism and pole dancing. I know a fair amount about one and nothing about the other (I’ll let you guess which is which). Plus the blurb also makes it sound like we’ve got an unreliable narrator going on, which might be my favourite writing device ever.

Last year at Ignite not only did Juncture Theatre perform the beguiling A Little Nonsense they also united with WBN on Cathedral Green to triumphantly complete the I crossword (with only one cheat). Even without those credentials, however, as a genetically pre-disposed hoarder, my own relationship with, well, stuff would have me intrigued.

At the start of our residency last Autumn the Bike Shed asked if a local, recently graduated director could observe during some of our R&D time. We said yes, and the director turned out to be Viki (on an entirely unrelated note, whose dresses I’d admired from a distance during Ignite 2013). Not only did Viki engage with and give us some incredibly valuable feedback on Blueprint she also ended up performing in Walking Stories. I’m a sucker for a one-person show (see Rose’s above) and I’m properly excited to finally get to see Viki’s own work.

My top 3 picks for Ignite:

1. Gloriator– Wednesday, Thursday and Saturday at Bike Shed.
A Very Very Famous actress (and her brow-beaten PA) attempt to perform all of Ridley Scott’s Gladiator armed only with some small cardboard props and one big ego. An absolutely hilarious piece of clowning- two very talented performers getting themselves into all kinds of absurd tangles. You have to see this.

2. Wildbore– Thursday, Friday and Saturday at Exeter Library
Solo performer Jesse Meadows reflects upon her life with her grandmother. A poignant examination of aging, bereavement and love between generations, told with humour and optimism.

We’ve been excited about this for some time, but, since the Ignite programme launched today we can properly announce that we’ll be taking two shows to Exeter this year.

First up we’ll be premiering Blueprint at the Bike Shed from 3rd – 5th June. We developed Blueprint during our residency at the Bike Shed last autumn so, really, there’s no other venue we’d want it to start its adult life in. Continuing our preoccupation with how and why people tell stories, in Blueprint we’re exploring how a character named Kate narrates her life story (all filtered by her brain in the moment before she dies). It also includes some physics, a stopwatch and some distinctly disturbing Mark Owen masks…

Second up we’ll be doing a one off performance of Joseph Mills Presents…Reasons for Listing: 16 Facts and One Story About Things That Make Me Happy at Exeter Library at 4pm on the 4th June. As well as being a love letter to libraries, this show also means that anyone who saw Beneath the Albion Sky last year and would like to spend some more time with Andy Kelly telling them a story has the opportunity to do so.

It’s probably safe to say that, such is our all-consuming love for Ignite after our adventures there last year with Albion, even if we hadn’t been invited back we’d be turning up. Plus this year they even have THEIR OWN FESTIVAL ALE. Seriously, can you imagine a better festival?

One of the things I’m keen for this blog to do is reflect what it’s actually like for, to use a term I’m sure is a bit waffly, an “emerging theatre company”. By this I mean: the bad stuff, and the dull stuff and stuff that makes you wake up at 2.30am in a cold sweat as well as the oh-we-made-a-show-and-it-was-so-much-fun stuff.

Which is maybe why it’s taken me some time to write this blog post.

“You know that dream you have about festivals…” I said to a good friend who also happens to make stuff. Immediately I saw the look of horror spread across his face.

“No, not the dream where the actor forgets all the lines and there’s no audience except for a solitary reviewer who absolutely hates the show and you end the night vomiting in a gutter having lost a large portion of your clothing, several thousand pounds and all of your dignity. The dream dream. The one that you’re not supposed to believe actually happens.”

“I think…I think it sort of happened.”

We’ve lived some time with Beneath the Albion Sky and, as I’ve discussed before, it’s not always been the smoothest of processes. Of course when, as a company, you’re writing and making and producing the play there are inevitably moments when putting your head in a blender would come as welcome release. Maybe when the Albion Sky journey is complete (for we still have quite a long way to go with it yet) I will blog about all of those bits.

But, for now, it’s probably a fair representation to say that we had an utterly brilliant time at Ignite. Great word of mouth, lovely full audiences who laughed and awwed and held their breath slightly in all the right places (and, most excitingly, in places which were entirely right but we hadn’t realised were there), an awesome review in Wildfire (the festival’s daily publication), people coming to see the show because they’d seen the scratch back in November and, just when we were back in London and in danger of coming down from our festival-sugar-rush, news that Albion Sky had been chosen for one of the Critics’ Choice awards as one of the Wildfire Five.

(If you’re really, really interested you can see all of that in our storify of what people said about Albion where it’s been handily gathered together for your – and indeed our parents – ease of reference.)

But that’s just half of what made Ignite so special. Chatting in bars with other theatremakers and the wonderful discounted tickets for performers to see shows in the festival and the buzz and excitement and the willingness of everyone to take risks and to see work as more of a journey of the company than as a one off piece and lemon meringue ice cream in the sunshine and Exeter being bloody beautiful and £3 doubles and dreaming up a new play idea at midnight and…I could go on but it would be sappy and it would probably require you to roll your eyes A LOT.

I’m sure I will return to Albion Sky and some of the things – as writers – that we learnt from it over the course of the rehearsal process and the festival and maybe it shall be serious and intelligent and make some sense.

But for now I’m just leaving you with how gloriously, heart-burstingly happy Ignite made us. 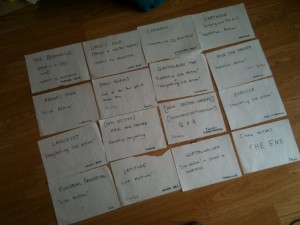 The photo above is something which simultaneously makes me excited and want to be a little bit sick. For, in those bits of paper, there is a play. A play with a beginning, a middle and an end (possibly even in the correct order). The play concerned is Beneath the Albion Sky and, in a month’s time, for the first time ever, we’re going to be performing it in its entirety to actual audiences in an actual theatre as part of an actual festival. If there’s anything that makes me want to take deep breaths into a paperbag then that sentence is it.

But – yes! – we shall be bringing walking boots and myths and legends and possibly even a tent into the BikeShed Theatre as part of Exeter’s Ignite Festival where we’ll be performing on the 4th June at 8.10pm and the 5th June at 6.30pm. And you can buy tickets here.

Having previously scratched extracts of Albion Sky with the BAC at Latitude Festival and the BikeShed’s own SCRATCH and with what Charlie and I are referring to as Draft 0.925 (snappy, right?) in hand we’re about to embark on three-and-a-bit weeks of Intense Scary Rehearsal. And, since I clearly do not have anything better to do than reveal my writerly state of panic through the use of CAPS LOCK, I’m going to be blogging the process. Even the bits where I have to go lie down in a darkened room. Don’t say I didn’t warn you.